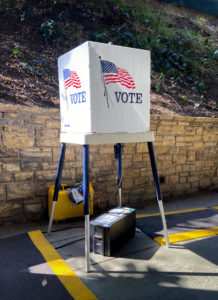 Voting centers throughout Los Angeles are being quietly powered by next-generation mobile battery units from FreeWire. The County of Los Angeles deployed Mobi Gen units at voting centers, including the iconic Hollywood Bowl (pictured), for primary and backup power applications. Mobi was chosen as a rapidly-deployable and environmentally friendly safeguard against power failure as part of the County’s commitment to safe, reliable voting this election cycle.

The County of Los Angeles first provided the battery-backed Mobi Gen units during the March 3rd Presidential Primary elections at nine locations across the county. The County again relied on the units for backup power during the Presidential Election over the past month.

The Hollywood Bowl Mobi Gen is configured to power voting booths in line with the power supply from a nearby electric vehicle (EV) charging port. It works as a battery-buffer: in the event of a power outage, only input power to the Mobi would stop, while energy and operation of the voting booth would remain uninterrupted. Thousands of voters have already cast their votes using the 34 electronic stations the Mobi Gen powers at the Hollywood Bowl. Each Mobi Gen has the capacity to power voting stations (or technology with similar power demand) for days without additional power. In one recent instance when grid power was lost, the Mobi Gen continued to supply power for the voting machines for two days before the facility regained power.

L.A. County’s health and sustainability goals, which are some of the most ambitious in the country, committing to “powering unincorporated areas and county facilities with 100% renewable energy by 2025” among other plans. Advanced battery technology such as the Mobi can offset other forms of backup power, including diesel-fueled generators, which contribute pollutants and greenhouse gasses detrimental to the environment and public health. Most battery-backed solutions are configured to be stationary and are not readily deployable for non-permanent use cases. In contrast, Mobi Gen features 80kWh of storage capacity, a built-in drive system and joystick for precise control— an ideal solution for easy placement at multiple locations during the election.

The technology was a successful demonstration by L.A. County to safeguard the security of the elections while also maintaining a commitment to the environment and health of the county’s constituents. Following the election cycle deployments, the Mobi units will be used during future community work as well as events and off-grid opportunities to deliver clean, quiet power throughout the county.